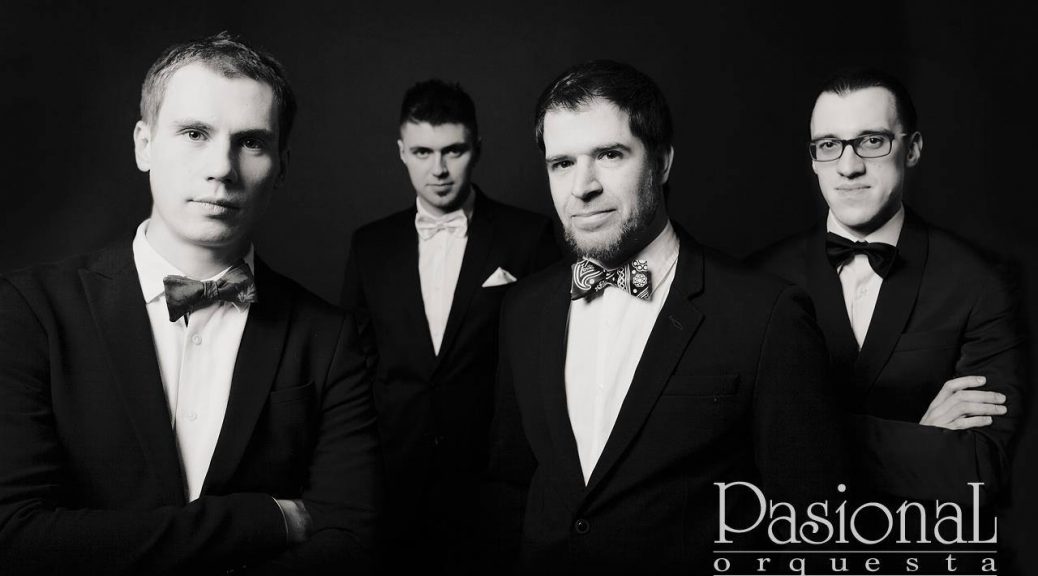 The orchestra is well-known anomg the international tango community. All the musicians are graduates of the best Russian musical colleges and universities. They perform in the best dancing halls, tango festivals and milongas not only in Russia but worldwide, famous dancers perform their shows with Pasional’s accompaniment.

Mostly they play argentine tango, arrangements and pieces from the Golden age of tango, written and arranged in 1930-40s by
J.D’Arienzo, F.Canaro, C. Di Sarli, R. Biaggi, J. Garcia, O.Pugliese and their orchestras. “We continuously work on our arrangements, make sure our quartet’s sound is volumetric and rich, like of a full big orchestra. That is why we add “Orquestra” to our name.” – say the musicians.

Let us introduce the musicians:

Konstantin Dorokhov – Violin. At the age of 3 he went to his first violin concert with his mother. Konstantin was so impressed with the captivating sound of this insttrument that shortly after the concert he asked his parents to buy him a violin. He started his musical education in a muscial school in the small city of Prokopyevsk in Kemerovo region. After graduating from 8-grade musical school he entered a musical college in Barnaul, Altay region. Later in Novosibirsk he took classes from russian Honored artist Zakhar Bron. In 2008 he continued his education in Musical college named after the Gnessins in Moscow, after graduating the college in 2010 Konstantin entered the Russian Musical Academy named after the Gnessins, class of O.O. Tikhonova.
“To be honest, very often we start improvising during our live performances. We have certain musical material we should play. But during the performance we begin to smile to each other, make jokes and it makes us go beyond the written notes” – Konstantin describes orchestra’s live performances in one of the interviews.
Konstatntin is a true virtuoso of violin and his style and performance will not leave you unimpressed!

Mikhail Kofanov – Piano. Mikhail is prize-winning pianist from Tula, comes from a family of musicians. He graduated from musical school and college with honors degree. After college he entered and successfully graduated from the Russian Musical Academy named after the Gnessins. Argentine tango made a great impression on Mikhail and now he explores styles of extraordinary tango pianists to make the sound of Orquestra Pasional closer to the Golden age orchestras.

Eugeniy Kozlov – Base. Eugeniy is a musician of great charisma which makes his performance truly unique and bright. Like his colleagues he also graduated from the Russian Musical Academy named after the Gnessins, later he continued his education in the College of Jewish Academy named after Maimonid. Eugeniy mastered double-bass and bass-guitar and specializes in latino-american music. Argentine tango is his passion and for many years he performed at various tango festivals and milongas worldwide.

Dmitriy Kovalenko – Bandoneon. At the age of 10 Dmitriy entered musical school to study accordeon. In 1999, an honorable graduate, he moves to Moscow with a dream at heart – to enter the College of the Gnessins Academy – and succeeds. In college he takes classes from master of accordion Y.I. Bubentsov. During his sophomore year Dmitriy comes accross the music of Astor Piazzola and gathers his first musical collective “SOLEDAD” – successful orchestra that performed worldwide during the next 10 years. From 2003 to 2008 he studies at the Gnessins Musical Academy and upon graduating moves to Buenos Aires. In the capital of tango Dmitriy buys his first bandoneon model Alfred Arnold Doble A – the one that Piazzola himself played. Since then began Dmitriy’s new musical life. Rare in Russia, hard to master instrument opened new possibilities for the tango musician. In 2011 Dmitriy along with his friends founded Orquestra Pasional.
“…the dancers are full of energy and so are we. When our energy flows combine – this is just great, it takes us to a whole new level of performance, if gives new ideas from us to the dancers” – says Dmitriy in one of the interviews.

We welcome you to join us on April, 29th 2017 at Milonga Grande. Let’s make a unique atmosphere together with Orquestra Pasional!